Cultural Monuments in Greece: The 18 sites inscripted as World Heritage Sites by Unesco 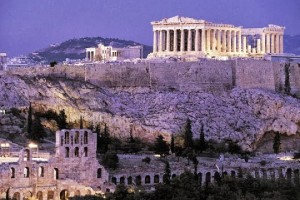 1. Athens Acropolis (including Parthenon), inhabited since the 3rd millenia BC. The Parthenon was built in the 5th century BC. Please note that in summer months visitors prefer to walk on the Acropolis hill early morning to avoid the bright sun and the high temperature. It is suggested to visit alternatively the Acropolis museum which contains invaluable statues and artifacts of the 'Golden Age' of Athens.

2. Delos island in Cyclades complex, central Aegean Sea. The island has been part of one of the most ancient and glorious civilization regimes in Greece, the Cycladic civilization, since the beginning of the 2nd millennium BC. After the Persian Wars (begining of the 5th century BC) Delos was announced as a sacred island, growing in wealth and reputation. Located near the famous Mykonos island, it is easy to visit on a touristic boat that starts from Mykonos port. 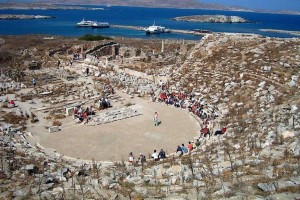 Delos island, at the heart of Cyclades

3. The archeological site of Epidavrus with the ancient theater. It is located in northern Peloponnese. The theater was constructed in 340 BC. In summer months (July, early August), there are performances taking place in the ancient theater (Fridays, Saturdays only).

4. Mycenae and Tyrinth archeological sites: Ancient monuments that represent the Mycenae Era, with great significance for Greek history and culture. The Mycenae site includes remains of the Palace of the Atreides Kings, mentioned in Homer epics, as well as the King's tombs, some magnificent samples of architecture in ancient Greece. The museum by the Palace contains a large selection of artifacts since the 3rd millennium BC. 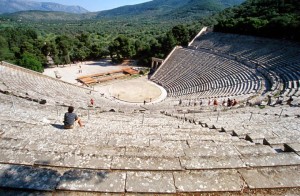 5. The ancient Oracle in Delfoi, Central mainland Greece. Pre-historic evidence dates back in 4th millenia BC. The oracle, considered to be the "Navel of the Earth" in Ancient Greece, due to its geographical position but also due to the importance of the temple. Recently, there are plays performed in the venue of the ancient theater.

6. The medieval town of Rhodes. Located in the main town of the island, in southwestern Aegean Sea. It was built since the early 6th century, around the Acropolis of the ancient town. Walking through the impressive buildings and romantic alleys of the Town, is a must for visitors to Dodecanese islands

7. Patmos island: Historic Center, the Monastery of Saint John and the Cave of Apocalypse. Patmos composes a historic monument for Christianity since it is the island where Saint John composed the Book of Apocalypse. The monastery was built in the 11th century. The cave where Saint John lived (allegedly in the 1st century BC), the monastery at the top of the town, as well as the medieval town itself have been characterized as an Unesco monument. 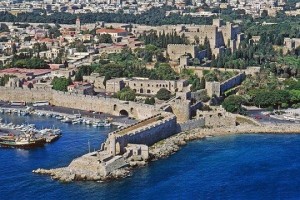 Sailing at the Dodecanese islands

8. The old town of Corfu. The town of Corfu, one of the most beautiful islands in Greek waters, has a strong Venetian influence, as well as British and French, following the change of Rule on the region. Different buildings and public spaces create a cosmopolitan atmosphere in the well-preserved Corfu town. 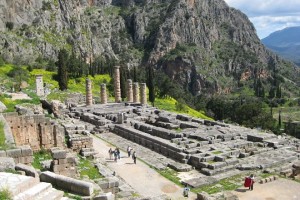 10. Ancient sites in Samos island, eastern Aegean Sea. Specifically, the ancient town of Samos, called in our days Pithagorion and the ancient temple of Godess Hera have been declared as Unesco monuments. Located between the trade routes between Europe, Minor Asia and Africa, the ancient island had developed wide recognition as an 'international' center of its era. The port of Samos was the first artificial port in Mediterranean Sea, while the reputation of the Temple of Hera had reached the whole Greece, neighboring Cyprus and Minor Asia, as well as the more distant states in Egypt and Middle East. Many of relevant artifacts are hosted nowadays in the Archeological Museum in Samos

11. Ancient Olympia. Western coast of Peloponnese. This is the cradle of the Ancient Olympic Games, and the venue has gained a unique recognition as a world wide cultural monument.

12. The temple of Apollo, Central Peloponnese. The area has been inhabited since the 3rd millennium BC; the temple was constructed in the 5th century BC. 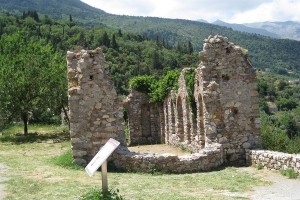 13. Mystras, in southern Peloponnese. It is an old, abandoned settlement, of houses, towers and temples, built on Taigetos island. It started being built around the 13th century AD, during the Byzantine era.

16. Meteora monasteries, in Kalambaka, mainland Greece. The sight seeing includes not only the monasteries but also the breath taking, tall rocks that the monasteries are built on. Their construction started in the 10th century.

17. Archeological Site in Vergina, Macedonia, Northern Greece. The site is dedicated to the ancient state of Macedonia, that under the leadership of Great Alexander dominated Greece, Middle East and Asia till India, on the 4th/3rd centuries BC. The discovery of Kings' Tombs in the era of Vergina gave a strong glory to Vergina.

18. Ancient city of Phillipi lies under the modern town of Kavala. Founded in 356 BC by the Macedonian King Philip II, the city developed as a “small Rome” with the establishment of the Roman Empire in the decades following the Battle of Philippi, in 42 BCE.

Explore Greece and the Greek islands on a sailing yacht!

Mob. +30 6943291139
This email address is being protected from spambots. You need JavaScript enabled to view it.